I wanted to do something a little different for my film about professional experience as I guessed a lot of people would be doing vlog style pieces. I also didn’t have many pictures of myself at work, as I’m normally the one taking the photos rather than posing for them, so thought about doing something a little more experimental.

Travelling to a work placement one morning I began thinking about how much I have grown and developed during my professional experience and realised I had been on a kind of journey from student to tentative media professional. So I decided to look at filming my physical journey to work to parallel my “journey” through work.

I used my phone to film my train journey from Coventry to Grand Central station but watching the footage back I found it wasn’t as interesting as I had hoped. So I started to think about how we all view our routine daily journeys. Do we really pay attention to the world going by outside or do we instead occupy our journey time scrolling through Instagram, catching up on Facebook or replying to emails and messages on our phones or laptops?

Right now in the town where I live many structural changes are being made. Once buildings are knocked down people often complain about places being missed, but do we ever really appreciate the architecture around us until it is gone?

This lead me to thinking about viewing my journey each day a little more clearly and trying to watch and appreciate the small changes around us.

When I view the world through the viewfinder of my camera I notice so much more beauty in every day things so decided to add an additional lens in front of my camera and revisit a previous project where I had designed my own vortograph to slightly skew my view of the world.

I added narration to the film to explain my personal journey and I hope it will inspire people to think about their own “journey’s”, both physical and personal, after watching it.

If you look closely while watching the film you can see that at some points my reflection can be seen in the train window, so despite my intention to leave my image out of the final piece it turns out I’ve managed to make a cameo appearance after all. 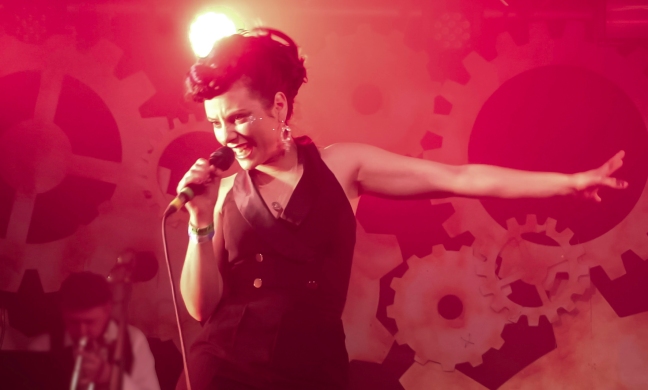 A few weeks after working at the Flatpack Festival I was contacted by Lauren, the festivals co-ordinator, to see if I might also be interested in volunteering at the upcoming Swingamajig festival.
Last year I filmed a television piece there, as part of our formats module, and I really enjoyed the festivals carnival style atmosphere. The festival celebrates all things swing and retro from music and dance to circus acts and big band performances. It’s very different to any festival I have ever been to before. Despite it growing in size each year it still manages to retain it’s friendly and welcoming atmosphere.

I arrived at Digbeth’s Rainbow Arches in full 1920’s attire, as I’d felt quite left out wearing normal clothes last year and dressing up was encouraged in the volunteer information so I thought I’d have fun with it. I’m so glad I made the effort now as how I was dressed ended up making a difference to the job I was given, so I’d definitely consider this when getting dressed for future job roles. I’d say, always ‘Dress the Part’. So if it’s a wedding or formal occasion, don’t turn up in casual clothes; if you’re going to be filming in the woods in autumn think about walking boots and waterproofs. It may seem like it doesn’t matter what you wear as a filmmaker or photographer but, sadly, we are still often treated how we are perceived and dressing appropriately can help to give an added air of professionalism. Even the simple, accessory filled, apron I wear on set helps to identify me as a crew member and it gives me a little more confidence and somehow makes me ‘feel’ more professional.

There were five of us in the Stewarding team but as I was the only one totally over dressed they decided I should be at the front of the festival welcoming guests in and directing them in to the entrance gates.

This job was quite different to my usual roles but really allowed me a unique view of the festival itself. I got to talk to artists and musicians as they arrived, meet the photographers and filming crew, spend time with security and find out what goes on behind the scenes of running a festival that size but I also got to interact with the public and feel their excitement and enthusiasm for the festival itself.

Swingamajig festival is a true love affair of it’s creators the band Electric Swing Circus, who orchestrate the whole event with a very hands on, personal approach. During my time at front of house I saw Tom walking past again and again. Meeting and greeting musicians, carrying equipment, and even bothering to stop and make sure myself and the other volunteers were being taken care of and enjoying our roles on site.

After seeing Tom’s approach I feel that this is the type of director or producer I also hope to be one day. Someone who doesn’t think they are above everyone else; someone who gets involved and helps out when it is needed; someone who cares about the people on set and ensures the crew works together, looking out for one another, with one combined goal in mind; the success of your team and your final project.